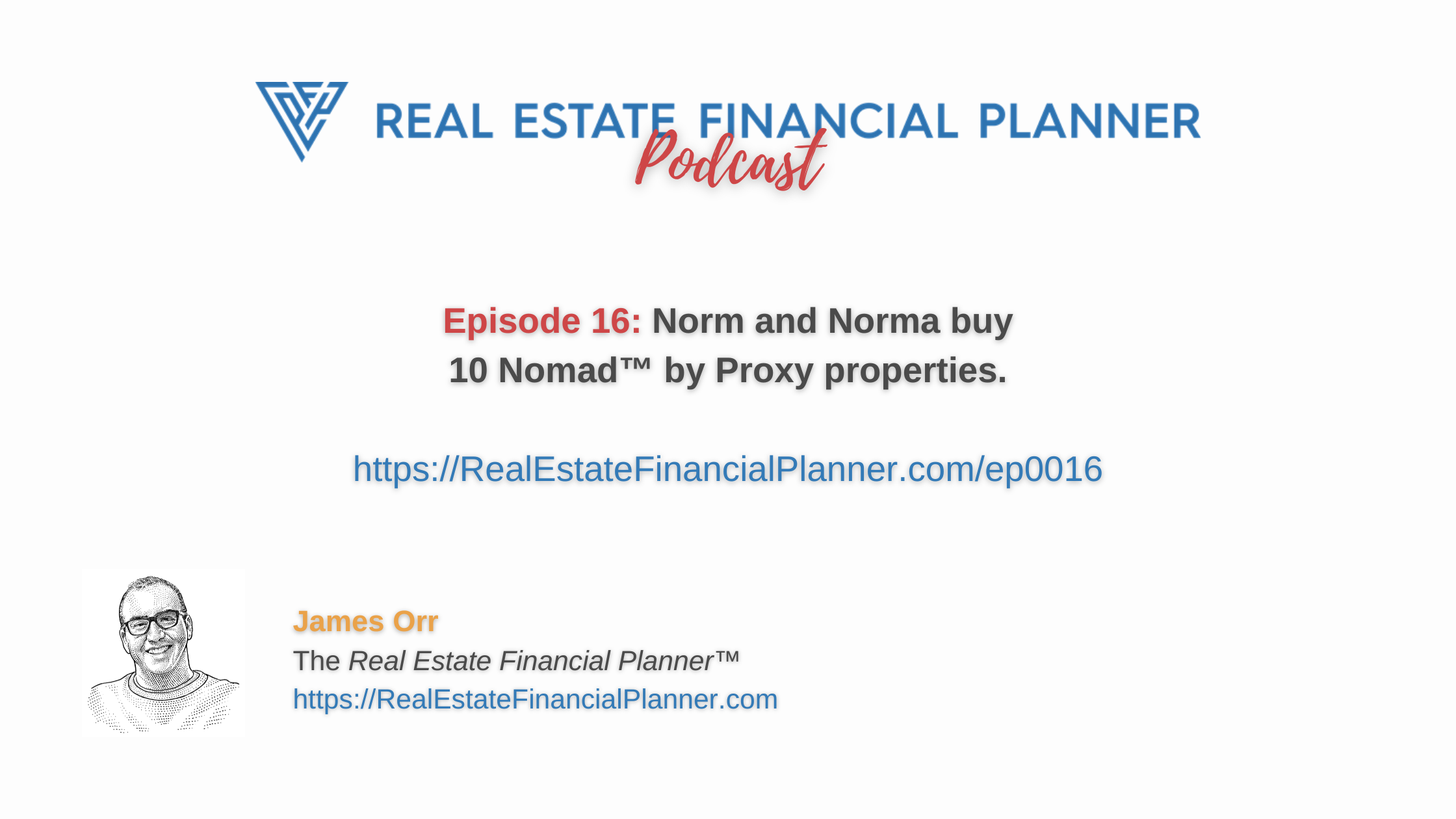 Welcome to the Real Estate Financial Planner™ Podcast. I am your host, James Orr. This is Episode 16.

When we last left , had woken up from a nightmare in a cold sweat and an achy back with the mere thought of moving 10 times to utilize the Nomad™ real estate investing strategy.

Surely, there must be a way to get the benefits of Nomading™ like the zero of small down payment or the significantly better owner-occupant interest rate without having to move into each property and live there for a year.

When someone else is moving in on your behalf when Nomading™ we call this Nomad™ by Proxy.

So, if that were a possibility for … which it isn’t since they’re just out of college themselves with no college-aged kids of their own… they could avoid moving into the property themselves.

But, there are other variations of Nomad by Proxy™ that might be a possibility for them. For example, Norma’s parents who are divorced would be willing to move into properties.

Now, Norm, Norma and her parents would need to connect with their lender and work out how to structure these… it usually requires that Norm, Norma and the parent moving into the property all be on the title to the property. And, they’d also want to figure out who is responsible for down payment, how is ownership defined, what happens when one or more of them dies… basically, everything you’d need to negotiate in any partnership.

For the sake of considering this strategy in this episode, we’re going to assume they provide all the down payment and that they need to qualify for the loan with just their income and debt-to-income calculations. We also assume that because they paid all the down payment and qualified, they end up working out with Norma’s parents that they will ultimately own 100% of the property.

Remember, aren’t moving into the properties themselves… Norma’s parents are. They’re divorced. So each one could move into 5 properties over however long it takes for them to qualify to buy the 10 properties. They could alternate which one Nomads™ next.

And, since there is two of them, technically they can buy two in one year provided they have the down payment, closing costs, income and debt-to-income to be able to qualify to buy two.

If you really step back and think about it, with enough other people to move into properties for you, Nomad™ by Proxy can look like they’re investing in rental properties with putting just 5% down. They even get to “rent” the properties out in the first year to whoever is living in the property. In this case, Norma’s parents are paying what looks like rent to help cover the costs to own the property.

The reality of implementing it is much messier though: they’ll need to negotiate the terms of the partnership aspect of having someone co-purchase properties with them. Which, we cover in more detail in the Nomad™ by Proxy class.

So, how does doing Nomad™ by Proxy impact their ability to achieve financial independence? 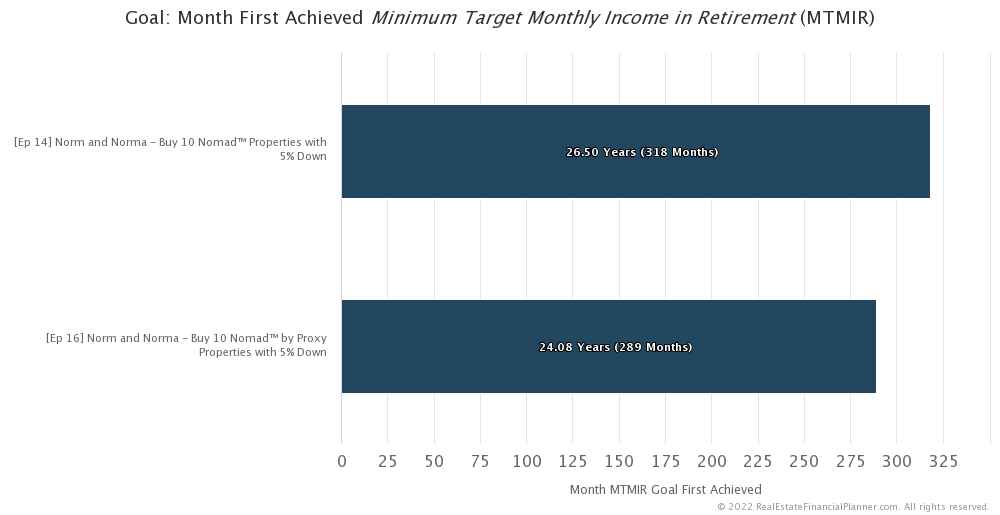 Part of what allows them to be financially independent faster is that they buy properties a little faster. They end up buying each property after the first one consistently a little faster.

One of the reasons they’re able to buy the properties a little faster is that they’re continuing to rent themselves. That means they’re saving a little bit more money each month when Nomading™ by Proxy.

Additionally, living in a rental with a slightly lower rent than what they’d be paying on a mortgage if they bought a property to live in also means their debt-to-income is a little better.

Buying properties faster also gives them a higher overall net worth. Of course, if they had to pay their proxy a fee or reduced rent or some other benefit, some of this additional net worth would disappear.

However, since it is Norma’s parents and their OK to do it without compensation to them in this unusually simplified example, they end up with over $80 million in net worth by year 60 compared to about $67.5 million as a traditional Nomad™.

If we adjust back to today’s dollars, it is more like a difference of $2 million dollars. Still significant in my opinion. Instead of $13.6 million when they Nomad™ by Proxy they’d have a net worth of *only* $11.5 as a traditional Nomad™.

I emphasize “only” because I question when did creating a net worth of $11.5 million dollars on a combined income of $72,000 per year not become a huge victory?

But what about measuring risk like Rent Resiliency™? In other words, how much can rent drop before they have negative cash flow?

Well, at first it is slightly riskier to do Nomad by Proxy™, but that’s because with traditional Nomad™ they live in the property for at least a year before it gets converted to a rental. So, they have at least a year to let rents creep up and that means that they’re slightly less likely to have negative cash flow.

However, because they acquire rentals a little faster, eventually they have more rentals and more positive cash flow sooner and that slightly improves their Rent Resiliency™ with Nomad™ by Proxy in terms of dollars.

In terms of what percent rents can decline before they have negative cash flow… what we call Rent Resiliency™ Percent, traditional Nomad™ is typically less risky.

By renting properties the first year to Norma’s parents means they have more negative cash flow.

Compare that to living in the property for the first year with traditional Nomading™ where they get to wait at least a year for rents to improve slightly before they convert an owner-occupant property to a rental. That helps to eliminate some of the negative cash flow.

If that negative $116,000 in negative cash flow scares you, realize that’s ignoring the tax benefits of depreciation.

If we take into account the Cash Flow from Depreciation™ as well when we calculate cash flow, we call that True Cash Flow™.

Debt to Net Worth

If we look at a couple other of my favorite ways to measure risk, you can see that Nomad™ by Proxy is ever-so slightly less risky than traditional Nomad™.

The risk is reduced even more when we measure debt to liquid net worth… what we call debt to account balances.

But what about reserves?

They need to have more in reserve when they own more properties sooner.

But, they end up having more months of reserves when Nomading by Proxy™ than when doing traditional Nomad™ in our modeling.

In conclusion, if can convince Norma’s parents to separately move into a property while they provide the down payment and qualify for the loan and pay rent to while they live there and agree to turn 100% ownership of the property over to them then that works out in their favor.

They can achieve financial independence faster than traditional Nomad™ where moved into the property for at least a year themselves.

Nomad by Proxy™ does produce more negative cash flow. However, if you also consider Cash Flow from Depreciation™ it is a reasonable amount… less than $12,000 total for all 10 rental properties.

Nomad by Proxy™ seems to be more susceptible to declines in rent but otherwise appears to be overall less risky in a couple key measures of risk.

review some of the previous real estate strategies they considered to this point and realize that doing short-term rentals was a pretty good strategy. They wonder what the impact of combining Nomad™ with short-term rentals might be.

Could they do Nomad™ to acquire properties with very attractive owner-occupant financing with great rates and low down payments and once they’ve fulfilled their occupancy requirements after at least a year, they could convert the properties to short-term rentals instead of converting them to long-term rentals.

They wonder how that might impact their ability to achieve financial independence. We’ll find out in the next episode.

I hope you have enjoyed this episode about utilizing Norma’s parents to Nomad™ by Proxy with them. This has been James Orr with the Real Estate Financial Planner™ Podcast. Bye bye for now.