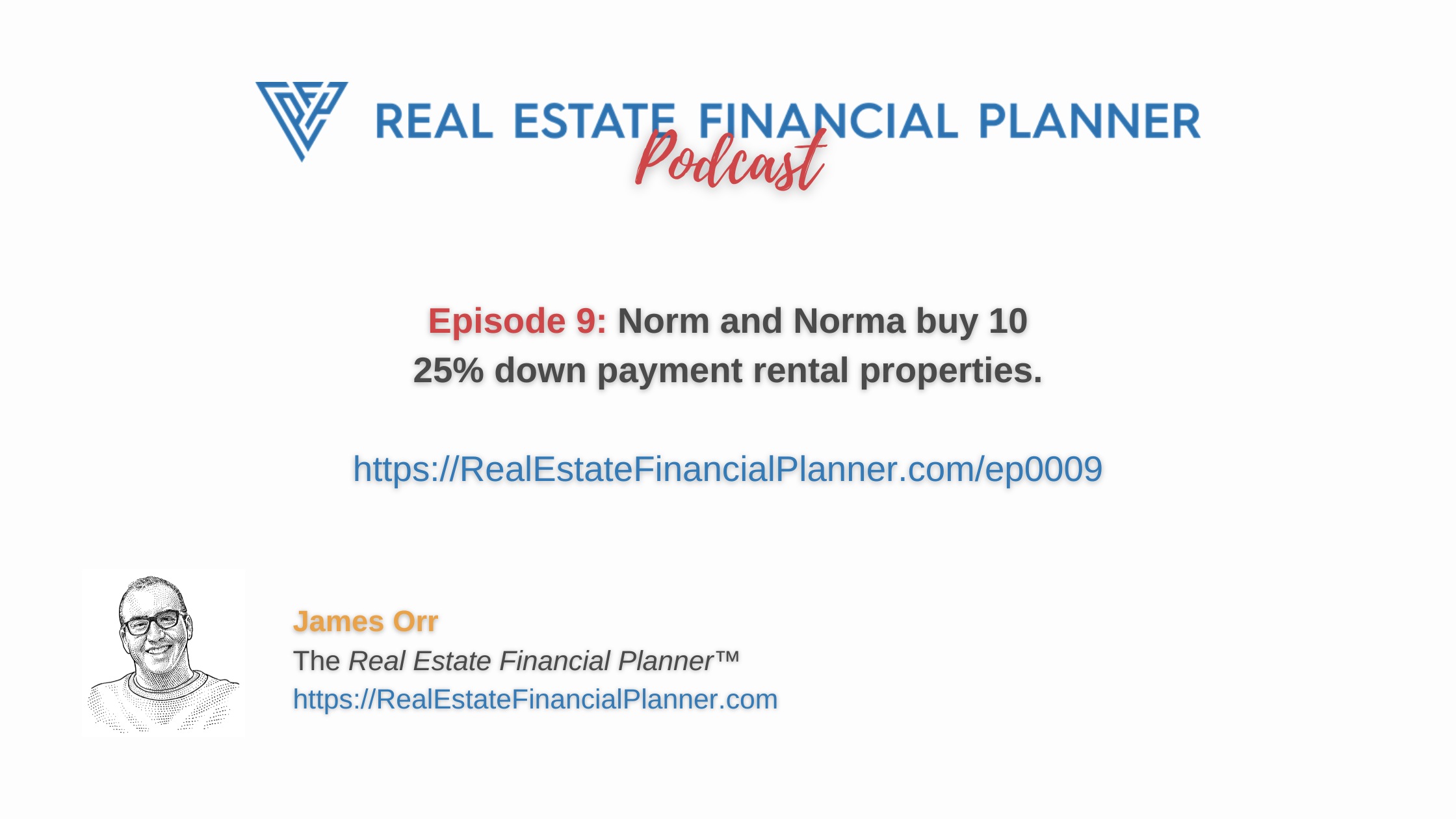 Welcome to the Real Estate Financial Planner™ Podcast. I am your host, James Orr. This is Episode 9.

If you recall from last episode, they decided to rent themselves but save up for 20% down payments to buy 10 rental properties to rent out to others. They were relying primarily on the cash flow from these properties to eventually be able to provide them with their minimal target monthly income in retirement so they could stop working their tech jobs.

By investing in 20% down payment rentals they were able to achieve financial independence in just under 31 years… 370 months.

What difference will it make by putting 25% down when they buy their rentals? Will it allow them to achieve financial independence faster or will it be slower?

For example, they’re able to buy their first rental property in month 92 when saving up for 20% down payments but it takes 7 months more for them to save up the extra down payment required for a full 25% down payment plus closing costs and reserves in both scenarios.

You might be wondering if this delay would lead to achieving financial independence a few months later saving up 25% down payments instead of 20% down payments.

Well, not so fast.

What are the benefits of putting 25% down when buying rental properties over putting 20% down?

Well, there’s the obvious… by putting more down, they are borrowing less.

I will admit by purchasing the property a little later it does give the property a little time to appreciate which means the loan amount is higher than it would have been if they could buy it 9 months early. But the property values are going up 3% per year and we’re talking less than a year of appreciation compared to putting an additional 5 percentage points down. So, borrowing less… at least in this case… is still a benefit of putting 25% down.

But that’s not the only benefit of putting 25% down over putting 20% down.

For example, when talked to a lender to get mortgage interest rates for considering these strategies they were quoted 6.625% with 2 points for 20% down payment and 6.5% with no points for 25% down. While it is only a difference of 1/8th of a point, to get that rate for 20% down it costs them 2% of the loan amount… that’s the two points. And to get the 6.5% for the 25% down payment it costs them no points.

Having a lower mortgage interest rate… especially combined with borrowing less by putting more down… means that their monthly payment is lower.

One way that we measure risk is how resilient they are if rents go down before having negative cash flow. Improved cash flow, makes them more resilient to rents dropping. They could weather a decline in rents better with 25% down than someone who put 20% down on the same property.

A similar thing could be said about price declines. They are more resilient to being upside down with their mortgage if prices decline by putting 25% down instead of 20% down.

But wait… there’s more… with improved cash flow and lower mortgage payments, their debt-to-income is improved as well.

If their rental property acquisitions were being limited by debt-to-income this could be an even more significant benefit. Fortunately, regardless of whether they put 20% or 25% down they were not really pushing their debt-to-income ratio anywhere near their qualification limit.

And finally, putting 25% down means they have less overall debt. That means that some of the other ways we like to measure risk… like debt to net worth is better when they put more down. That means it is less risky to put 25% down.

A similar case can be made when we measure debt to their liquid net worth which we call debt to account balances. Putting more down means they have lower debt and therefore lower overall risk.

Fortunately, they don’t have to make that choice because it turns out that it is faster achieving financial independence putting 25% down.

With 20% down payments, they end up with a net worth of about $60.64 million after 60 years in inflated dollars. Compare that to about $58.59 million when putting 25% down. So, about $2 million more in net worth in inflated, future dollars.

Could being able to buy rentals with 15% down payment non-owner-occupant loans sooner make a big enough difference for it to be faster for to achieve financial independence? Even with the private mortgage insurance they would need to pay by putting less than 20% down? In the next episode, we will see how putting 15% down with PMI impacts ‘s ability to achieve FI.

I hope you have enjoyed this Episode about putting 25% down to buy rentals. This has been James Orr with the Real Estate Financial Planner™ Podcast. Bye bye for now.

Get unprecedented insight into and Buy 25% Down Payment Rentals