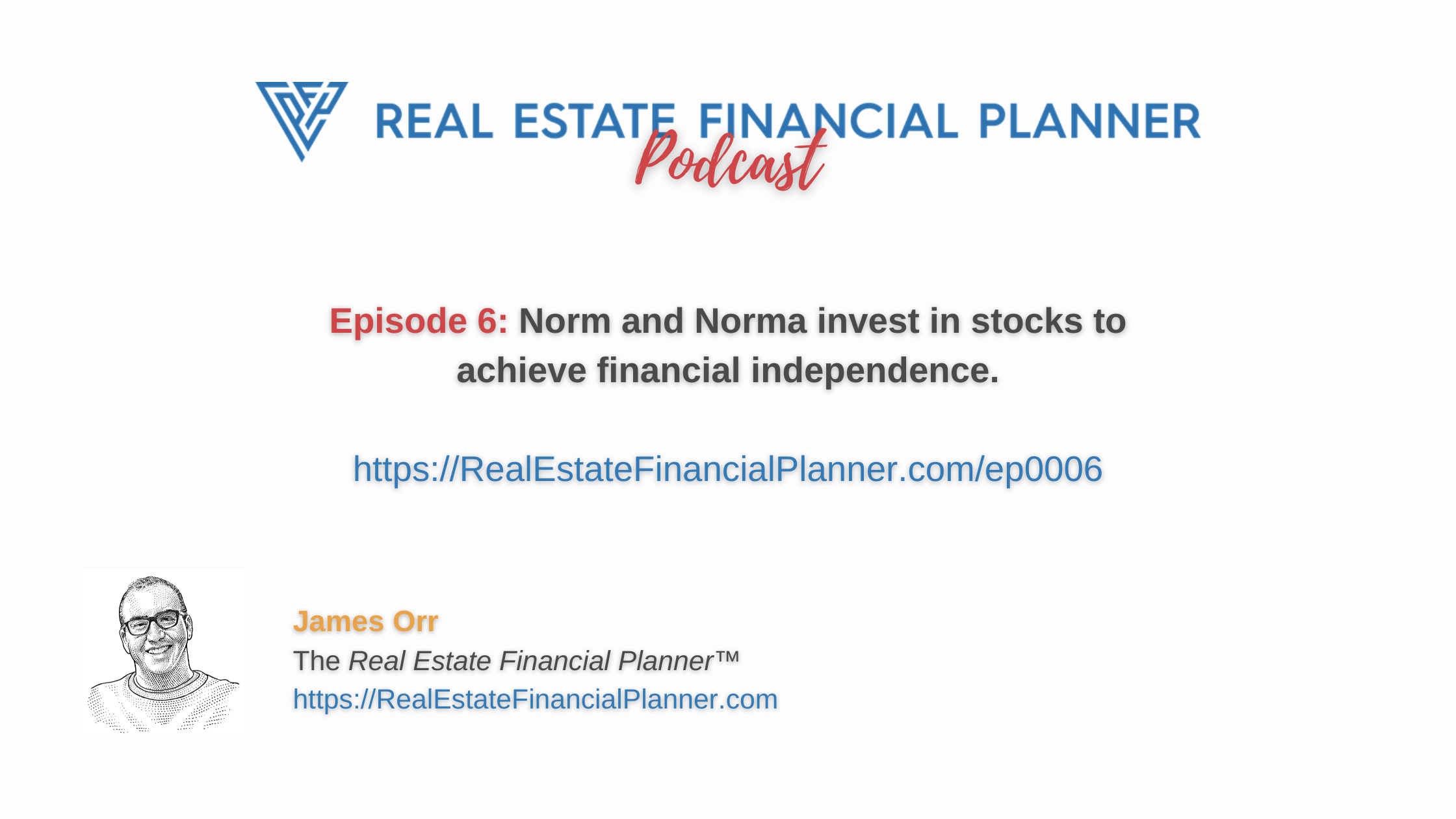 Welcome to the Real Estate Financial Planner™ Podcast. I am your host, James Orr. This is Episode 6.

Today we're going to meet and .

and met in college where they were both studying liberal arts.

They graduated with bachelor’s degrees and do entry-level work in the technology department for a large healthcare company.

They recently married and are both obsessed with the idea of achieving financial independence as quickly as possible so they can retire early.

They do not have any kids and… as of right now… they don’t have any serious plans of having kids.

For them that means they’re working about 2,000 hours per year at about $18 per hour.

For other listeners that are not earning $18 per hour… for you this could mean working slightly more than 2,000 hours per year at a slightly lower dollar per hour. For example, you could work a full-time job plus a part-time side hustle for an extra 10 hours per week for 50 weeks a year… working a total of 2,500 hours per year between both jobs at a rate of $14.40 per hour.

They’re lucky in that they do not have any other debt and have saved up $10,000 total.

As recent college graduates who have not experienced significant lifestyle creep, they’re able to live comfortably enough on the $72,000 of income that they’re able to save about $1,000 per month. That’s about $12,000 per year. That’s almost 17% of their income.

and are focused… and I mean *obsessively* focused on achieving financial independence.

They’re not afraid of hard work.

They’re OK with keeping their expenses relatively low… living off of $5,000 per month… if it means being able to be financially free and not having to work or being able to work on things that they’re passionate about.

They want to find the best path to financial independence together. They’re open minded to considering a lot of different options to achieve their goal.

Over the next several episodes they’re going to explore a variety of strategies to see which one gets to financial independence fastest, for a reasonable amount of effort and minimizing risk.

In this episode, they’ll be considering a traditional strategy of investing the $1,000 per month they’re saving and investing it in stock market index funds.

Plus, they’ll evaluate whether it makes sense for them to keep renting for $1,800 per month… and having that go up with inflation or to buy a property that will significantly increase their housing costs… but fix the principal and interest part of their payment to reduce the impact of inflation. Buying a property to live in will increase their standard of living but it will reduce the amount they’re saving each month from $1,000 per month to just over $400 per month. But, it will also reduce how much they’ll need to be financial independent when they pay the house off.

Ultimately, and would like to consider a wide range of options with the hope of minimizing their time to achieve financial independence with a reasonable amount of work and risk.

Their biggest fear is not having enough money to retire and… especially since they plan to retire early… they also fear running out of money in retirement.

Unlike Andrea in previous episodes, they’re not starting with a large lump sum of money. They’re starting with just $10,000 compared to Andrea’s $100,000.

Unlike Andrea who wanted to spend all her income on raising her two young boys, and are saving $1,000 per month of their income… at least if they keep renting their current place.

Unlike Andrea who focused in primarily on the Nomad™ real estate investing strategy… where she bought a property with 5% down payment as an owner-occupant, moved in and lived there for a year before converting the property to a rental after a year… and will consider the Nomad™ strategy but they’ll also consider a much larger number of other strategies.

For this episode though, let’s start by looking how quickly and can achieve financial independence earning 8% per year investing in stock market index funds.

If you remember from previous episodes, the sources of income for financial independence come from three areas:

For and , they are modeling having social security, but it won’t start for them until they turn 67 years old… that’s 46 years from now.

They don’t have a pension and they do not own any annuities.

In this episode, we assume they do not have any rental properties either… so no need to worry about cash flow from rentals.

They are investing money in stocks so they’ll primarily be relying on that to generate the income to determine if they’re financially independent or not.

And, they’ve decided to use a 4% safe withdrawal rate.

So, when they eventually save and invest to the point where they have $1 million dollars in stocks and bonds… stocks for them in this model… they’ll be able to withdraw about $40,000 per year from their investments and have a low probability… from the Trinity study… of running out of money.

That begs the question: when do they get to the point where the total amount they invested in stocks times a 4% safe withdrawal rate gives them $60,000 per year?

When social security does kick in… at age 67… they’ll have a much higher standard of living.

Could they stop working before age 61 knowing that when social security kicks in it will provide enough for them to be considered financially independent? Sure.

But, it would more conversative… especially with a longer retirement period they need to provide income during… for them to wait until their stock investments at a reasonable safe withdrawal rate can provide them enough to qualify as financially independent.

Over the entire 60-year modeling period, they never quite get to the point where a 4% safe withdrawal rate would support a $10,000 a month lifestyle. They do get close though… and they could probably increase the amount they’re withdrawing so they are living at a higher than $5,000 per month… adjusted up for inflation… lifestyle.

If they continue to spend just the $5,000 per month… adjusted up for inflation over time… they eventually end up with a net worth of over $17 million dollars sixty years from now… by about age 81.

What impact does buying a house to live in while still investing in stocks have on and ’s plan to achieve financial independence? It means they’re likely saving a lot less than $1,000 per month, but it also means that eventually they won’t have the principal and interest part of their housing payment. In the next episode, Episode #7… we will talk about the type of property they are buying and the impact that has on their financial independence plan.

Also, be sure to check out the Advanced Real Estate Financial Planner™ Podcast to see how having a variable inflation rate and, probably more importantly… a variable stock market rates of return impacts and as they invest in stocks and work toward achieving financial independence.

I hope you have enjoyed this episode about and investing in stocks. This has been James Orr with the Real Estate Financial Planner™ Podcast. Bye bye for now.

Get unprecedented insight into and baseline