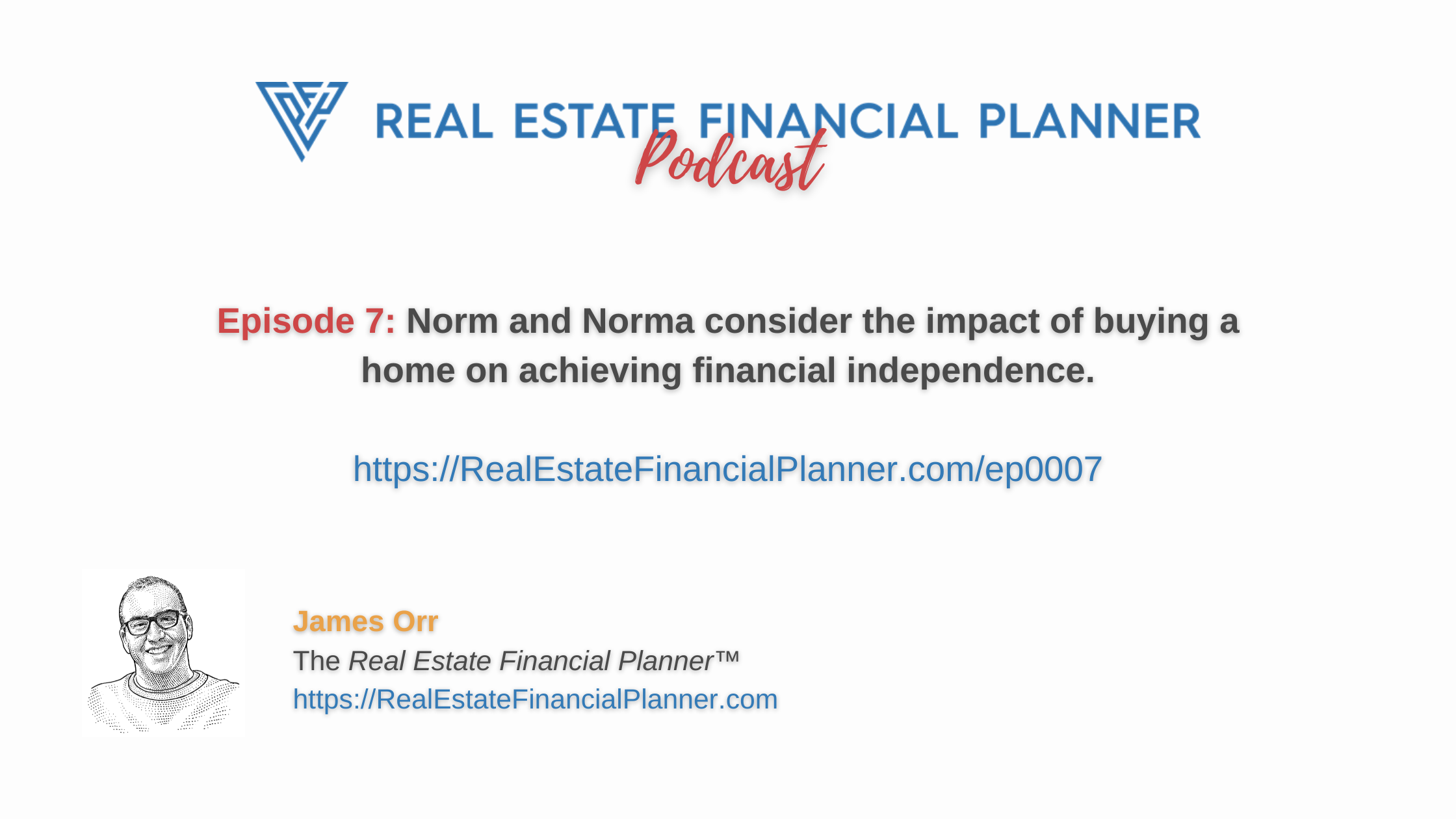 Welcome to the Real Estate Financial Planner™ Podcast. I am your host, James Orr. This is Episode 7.

Today we're going to continue with and ’s story.

If you remember from the previous episode, Episode 6, and are 21-year-old recent college grads that are working in the tech department of a healthcare company.

Because they have not had significant lifestyle creep from living as college students, they’re able to save $1,000 per month of the $6,000 per month they have in combined income.

They’re both obsessed with achieving financial independence and to be able to retire early.

They took some time to go through The Ultimate Financial Independence Retire Early Budget™ together and determine their current budget and savings rate and, in some ways to them… more importantly… their budget for being financial independent. In fact, they determined their minimum budget for being financially independent and their ideal budget if they were living their ideal lifestyle.

Download The Ultimate Financial Independence Retire Early Budget™ to go through it with your own income and expenses.

By going through the The Ultimate Financial Independence Retire Early Budget™, and have determined that they need $5,000 per month from their investments to consider themselves financially independent at a minimum. This is the same amount of money they are living on now, so that seems reasonable to them.

They’ve determined that to live their ideal lifestyle, they’d ideally want to be earning $10,000 per month.

In the previous episode, we had and invest in stocks with no real estate… not even an owner-occupant home for them to live in. Instead, they opted to rent. By investing in stocks, they were able to achieve financial independence… when the amount of money they had invested in the stock market… using a 4% safe withdrawal rate… provided them $5,000 per month… adjusted up for inflation… by month 482… or a little more than 40 years from now… when they’re about 61 years old.

In this episode, and will consider the impact of buying an owner-occupant home to live in while still primarily investing the stock market to achieve financial independence.

In their real estate market, by renting they are able… at least in the beginning… to save more money… because buying a home with a 5% down payment would result in them paying more than the $1,800 per month they’re currently paying in rent.

If they buy a property, it will increase their personal expenses. They go from paying about $1,800 per month in rent… adjusted up for inflation… to paying about $2,150 per month as a mortgage payment plus they will need to pay additional expenses for property taxes, insurance and some maintenance on the property.

It takes them about 26 months to be able to qualify to buy an owner-occupant property.

By then, they have enough for a 5% down payment plus about 1% in closing costs… and… just as important… about 6 months of reserves for this property.

And, at that point they’ll have enough income to qualify from a debt-to-income perspective to stay well below the 45% required Debt-To-Income level as well.

But, by purchasing an owner-occupant property to live in, they go from spending about $4,180 per month in personal expenses to about $4,805 per month when they buy a property in month 26.

They’ve reduced how much they’re putting away toward retirement by more than half. It was about $1,000 per month and now it is about $420 per month… That’s $580 per month less that they’re saving for retirement. That’s got to hurt, right?

Well, not so fast.

There are two things I want to discuss with you.

First, you’re right that as soon as they purchase the property their personal expenses go up considerably over what they were paying by renting.

However, when they buy a property, something changes.

Sure, their food and insurance and utilities and other living expenses all still go up 3% per year, but now… the principal and interest part of their living expenses becomes fixed for 30-years. Their mortgage payment is no longer impacted by inflation.

What’s interesting about that is that $1 in month 26 is worth a very different amount 360 months later… it is worth a lot less… from inflation.

In fact, if we adjust the mortgage payment for inflation, the payment amount appears to get cheaper over time. By the time they make their last payment, the last payment feels more like $837 in future inflated dollars instead of the $2,151 that it feels like when they first got the mortgage.

Now, before we get too far… I do want to point out that the property taxes and property insurance and property maintenance expenses they have by purchasing a property all are still going up with inflation over time. But, compared to the mortgage payment, those are relatively small in size.

Back to the impact of that fixed mortgage payment though on their personal expenses.

I’ve already conceded that… in the short-term… they voluntarily increase their expenses by buying an owner-occupant property.

Eventually, in this particular case it is around month 162… about owning the property for about 11 years and change… at that point, the expenses for being a renter cross over and become more than being a homeowner.

At that point, in today’s dollars, they start saving more than $1,000 per month… and it actually continues to increase each month.

So, while in the short-term it hurts their savings rate to buy an owner-occupant property, in the long-term, it actually helps them be able to save more.

But, do you remember when I mentioned that there were TWO things that I wanted to discuss with you.

Well, the first one was this idea that the mortgage payment is fixed and benefits them over time allowing them to save more as time passes, but there’s something else.

What happens 30 years after they get that mortgage?

That’s right, it gets paid off and the $2,151 they once had a mortgage payment goes to zero. At that point, they still have property taxes, property insurance and property maintenance but $2,151 of their expenses goes away.

In inflated future dollars, they’d be saving about $2,578 as a renter compared to about $6,306 as a homeowner.

And, as if that wasn’t enough… there’s another subtle but extremely important additional benefit hidden inside the definition of what makes and financially independent.

So, they really don’t need their investments to provide $5,000 per month anymore… it really is the $5,000 per month minus the mortgage payment. By paying off their home, they lower the bar required for being considered financially independent.

If they went back to The Ultimate Financial Independence Retire Early Budget™ and created a new budget, they’ll see that they no longer have a mortgage payment and that reduces their expenses by the payment amount that their mortgage was.

So, when do they achieve financial independence? And, is it before they pay off their mortgage or after?

It turns out they achieve financial independence a few months after they pay off their owner-occupant mortgage in month 396.

That’s about 7 years faster than they were able to achieve financial independence as a renter.

Additionally, by buying an owner-occupant property, and actually could live at a higher standard of living if they wanted.

Let’s talk about net worth.

In today’s dollars, that’s like almost $3 million to almost $2.5 million or about half a million dollars difference in favor of renting.

They got there by lowering the bar to being financially independent by not having to worry about a large percentage of the housing expense once they pay off their mortgage.

But… what if and decide to buy 20% down payment rentals? Does that speed up their journey toward achieving financial independence? Find out in the next episode of the Real Estate Financial Planner™ Podcast.

I hope you have enjoyed this Episode about and buying an owner-occupant property and investing in stocks. This has been James Orr with the Real Estate Financial Planner™ Podcast. Bye bye for now.

Get unprecedented insight into and Buy Owner-Occupant

Ep 07 Norm and Norma - Buy 1 Owner-Occupant Property, All Stocks with 2