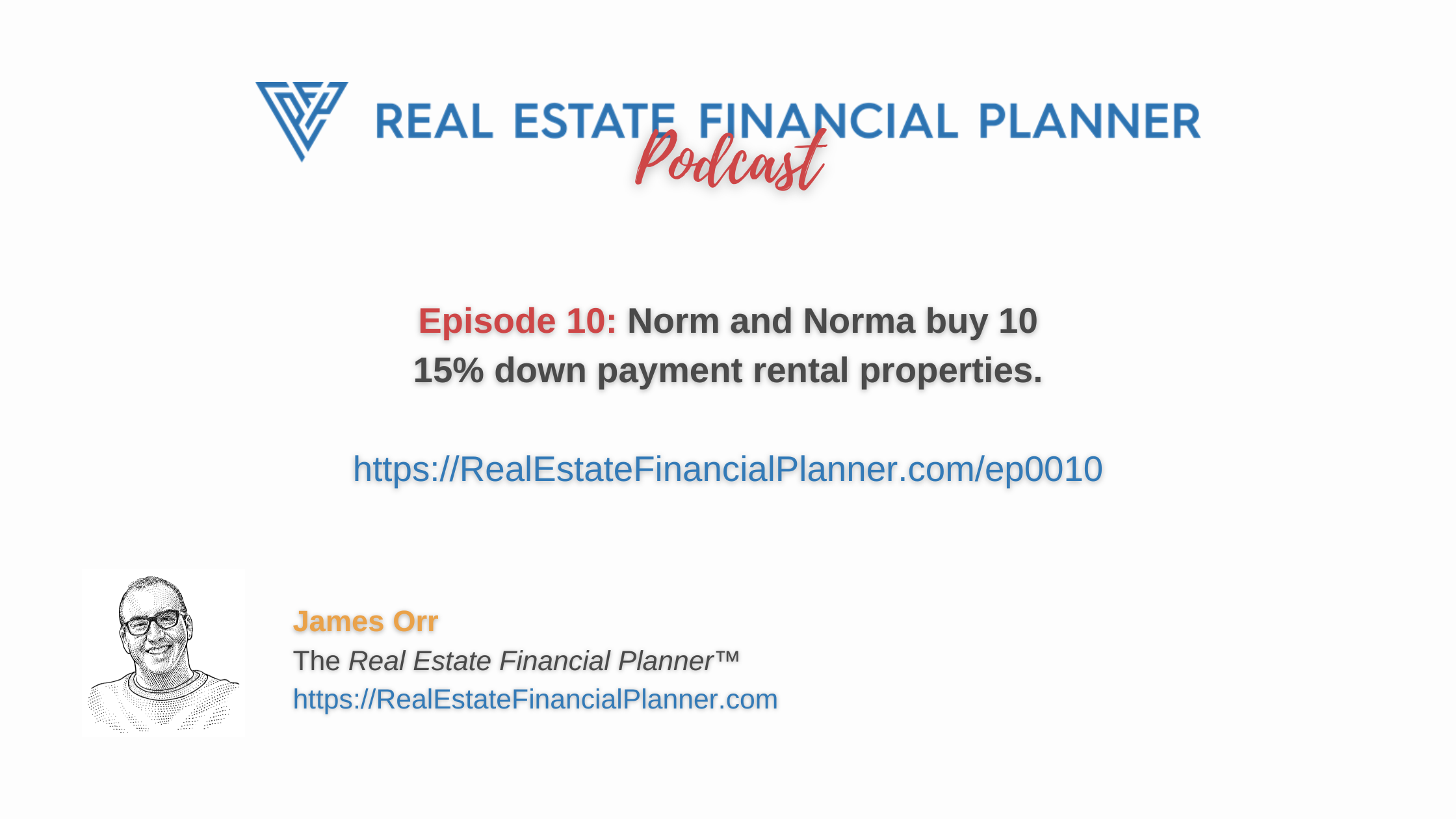 Welcome to the Real Estate Financial Planner™ Podcast. I am your host, James Orr. This is Episode 10.

It turned out that taking the extra time to save up an extra 5% down payment to get the lower interest rate and borrowing less resulted in being able to achieve financial independence faster… and arguably safer.

For many listeners this was counter-intuitive… surely buying properties faster would allow them to achieve financial independence faster. It turns out that for their specific situation and market conditions that was not the case.

But what if they are able to buy 10 properties faster by only saving up 15% for down payments? How long will it take them to achieve financial independence if they put 15% down when buying rentals?

But, that’s not the end of the story. Because it turns out that putting 15% down is very different in a lot of ways than putting 20% down or 25% down even if… in these very specific assumptions for and how the market performs… it turns out to be the same time to financial independence as putting 20% down.

The following were based on real mortgage quotes right before I made these Scenarios for . They do change over time though and the changes would definitely change how the Scenarios play out. That’s one of the reasons why we vary the mortgage interest rates in the Advanced Real Estate Financial Planner™ Podcast.

But, for this episode:

If we look at the Return in Dollars Quadrant™, we can see that the advantages of buying properties early is mostly found in the appreciation and debt paydown half. Neither of those directly count toward whether they achieve financial independence. They count toward net worth.

If they decided to sell the properties later or even refinance them, they could gain some of the benefit of early purchases but in this episode we’re focused on them just buying 10 rentals with a variety of down payments. In future episodes, we can come back and look at what if they sold off some or refinanced some rentals and paid off other rentals or, alternatively, invested the proceeds into the stock market or some other investment that counted toward achieving financial independence.

Let’s get back to the down payments, interest rates and PMI:

Number of Properties Paid Off

If you assume you’re going to just make the regular monthly payments on all your rentals, a magical thing happens when you get to buy properties earlier by putting 15% down over 20% down or 25% down… do you know what that magical thing is? You get to have paid off properties earlier. If you bought your first property 12 months earlier, you get a paid off property that same 12 months earlier. Why? Because 30-year amortizing loans pay off in… well… 30 years if you make all your payments as scheduled.

A paid off property with no mortgage, means they get better cash flow on that property. Better cash flow means they could… at least in theory… increase how much they spend each month and therefore have a higher standard of living.

Of course, all three strategies… regardless of down payment amount… end up with 10 unmortgaged rental properties at some point and then they all have very similar cash flow.

In fact, they experience what I’d describe as pretty significant negative cash flow when they put 15% down.

Significant is subjective, but maybe you too would consider over $80,000 total… across all 15% down payment properties and the entire 60 year run as significant… because that how much it was.

When we combine cash flow with Cash Flow from Depreciation™ we call that True Cash Flow™.

Another interesting way I like to look at this is to consider the total amount they needed to invest to acquire their properties including any negative cash flow.

That would be down payments and closing costs including points to get the loan plus any negative cash flow on the properties.

If we look at that, the largest investment made is when they put 25% down. That’s right, they end up investing more by putting 25% down than putting 20% down and 15% down.

But enough about how much they invested, let’s look at net worth.

Even though putting 25% down gets them to financial independence faster, the less they put down… at least with these static assumptions in this episode… the more net worth they end up with. 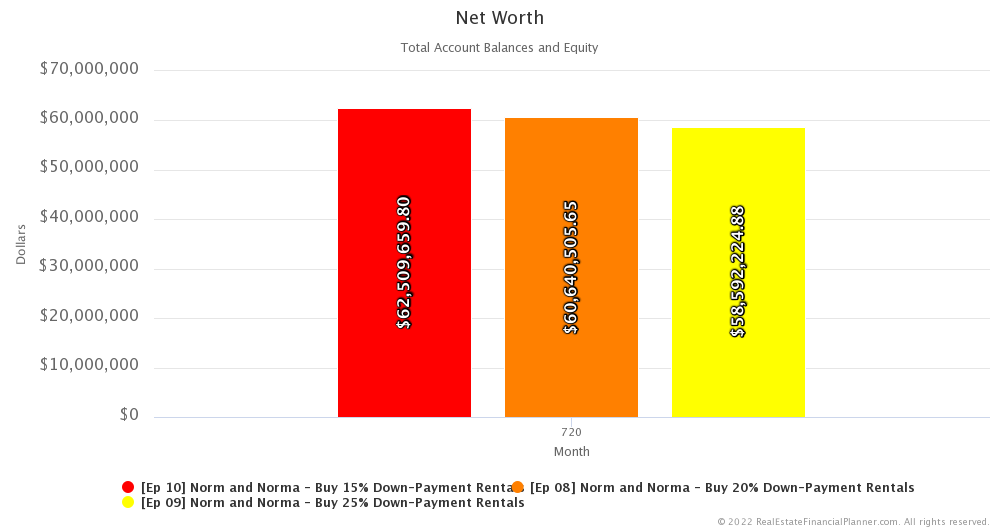 At the very end of our modeling after 60 years, putting 15% down leaves them with about $62.5 million in net worth.

Now, those are in inflated future dollars 60 years in the future.

In general, it seems that buying properties earlier helps with net worth as we suspected previously when we discussed the extra appreciation, debt paydown and tax benefits. But some of that is offset by some negative cash flow with the extra PMI and borrowing more.

Speaking of borrowing more, what about mortgage balances?

With higher mortgage payments comes less cash flow and therefore worse Rent Resiliency™. When they put 15% down, they increase their risk should rents decline. The least risky strategy in terms of Rent Resiliency™ is putting 25% down… they can afford to see rents decline the most before they have negative cash flow if they have the lowest monthly payments.

But, here’s something interesting… since putting 15% down means they have less equity in the property then when we measure things like appreciation that is the same regardless of how much they put down, the return on equity for those things tends to be better.

The same cannot be said when we look at the return on equity from cash flow.

The cash flow when they put 15% down is often negative… especially early on.

With negative cash flow, that hurts their debt-to-income ratio but not really enough to impact their ability to qualify for purchasing additional rentals. If they had other debt including an owner-occupant mortgage this might have a much more significant impact in their ability to qualify. We may return to this idea in a future episode when we see the impact of buying an owner-occupant property and buying additional rental properties. It might slow down their acquisition speed depending on the timing and assumptions.

Total Debt To Net Worth

We already discussed one way of measuring risk: rent resiliency or the ability for rent to drop without having negative cash flow. But that’s not the only way we measure risk.

Another way is the total debt they have versus their net worth.

And, it turns out that means their measure of risk in the form of total debt to net worth is worse and worse earlier than putting more down. This tends to be true for most of the time leading up to achieving financial independence. However, because they keep buying properties later when putting 25% down, the risk stays very slightly higher later when they put 25% down.

Another variation of measuring risk involving the debt load is the total debt compared to how liquid they are with money in their accounts… and by this we’re explicitly excluding net worth from property equity.

We call this total debt to account balance and a similar phenomenon occurs here… put less down, increase your risk.

The exception is that they’re buying properties later when putting 25% down so the risk lingers longer with 25% down then putting 15% or 20% down.

Besides the debt based measures of risk, I also like to consider reserves as a measure of risk.

However, in all three down payment cases, they are making certain they’ve got 6 months of reserves saved up before they buy their next rental. That’s in addition to the down payment and closing costs required to buy the next property.

When we do the advanced modeling though this may not always be the case. Check out the Advanced Real Estate Financial Planner™ Podcast to see the impact… if any.

However, it comes with an increase in risk in just about every measure except the number of months of reserves which is similar because they refused to buy properties without 6 months of reserves in any of the 3 different down payment scenarios.

In all three of these down payment scenarios, were renting themselves. They never bought an owner-occupant property and instead focused on buying 10 rental properties in all cases. I wonder what would happen in each of these 3 scenarios if they bought an owner-occupant property first then decided to focus on buying rentals. That’s what we will focus on in the next episode of the Real Estate Financial Planner™ Podcast.

I hope you have enjoyed this Episode about . This has been James Orr with the Real Estate Financial Planner™ Podcast. Bye bye for now.

Get unprecedented insight into and Buy 15% Down Payment Rentals