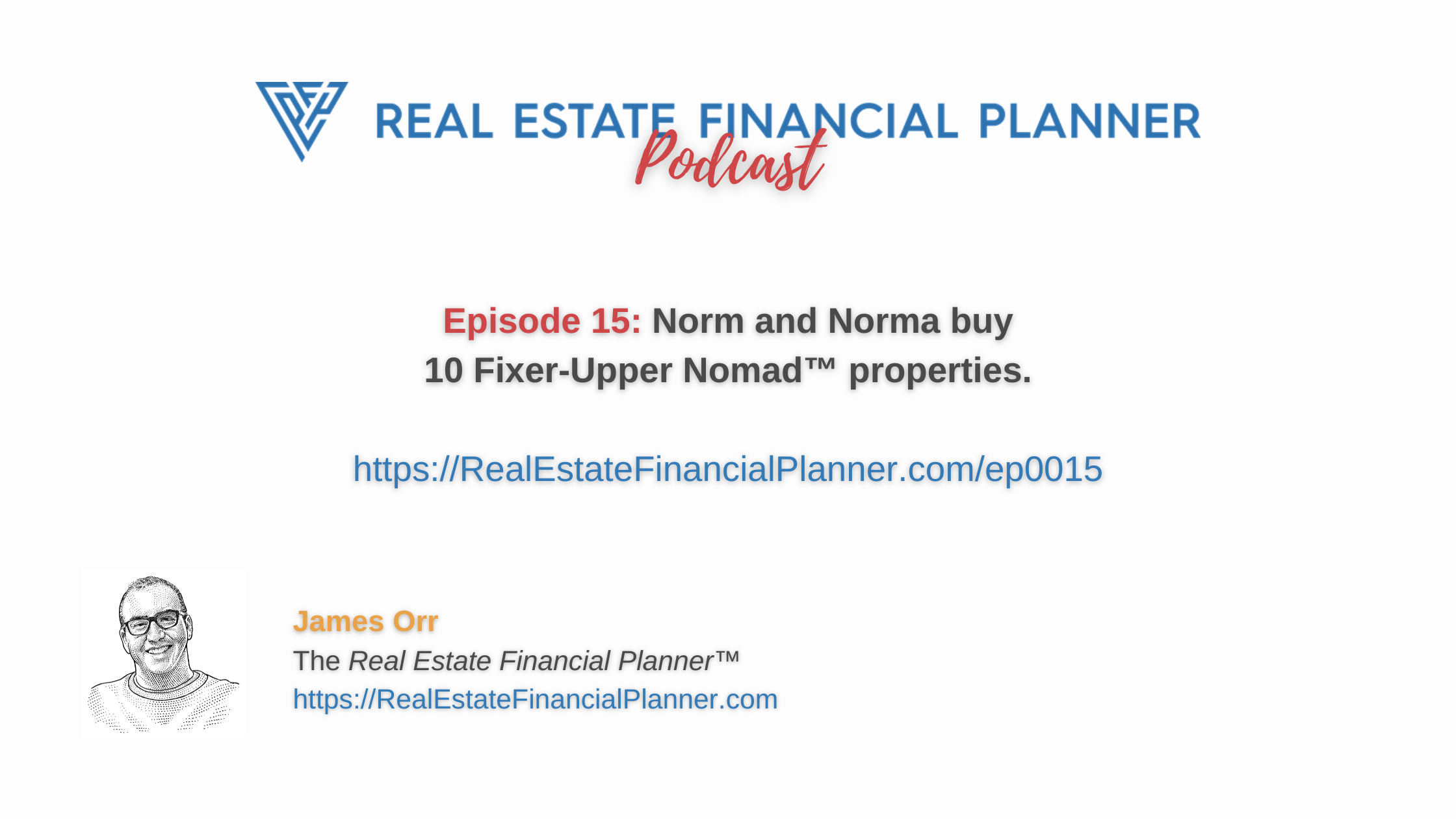 Welcome to the Real Estate Financial Planner™ Podcast. I am your host, James Orr. This is Episode 15.

In the last episode, we explored how utilizing the Nomad™ real estate investing strategy meant they could achieve financial independence faster than all previous strategies they considered to this point.

Nomading™ was the fastest path to financial independence so far.

To recap what the Nomad™ strategy is again:

So, that’s what did in the last episode.

But Norma is handy. She’s not afraid of buying a property that needs a little bit of work and earning a little sweat-equity.

What if they could buy a property at a 10% discount that needed work but still do the Nomad™ strategy?

What impact would that have on them achieving financial independence?

For our modeling, they’re buying the property at a 10% discount, but the property requires about $12,000 in hard costs plus their labor to capture that equity.

So, they’re not really capturing 10% of equity… it is 10% of equity minus about $12,000 in hard costs. Plus, in addition, whatever the value of their labor is in fixing up the property.

So, maybe they’re really capturing about $25,000 in equity by buying a fixer-upper.

When we do our modeling we do assume that the $12,000 in fix-up costs do go up with inflation as well.

Now, to be able to buy the property, we’re assuming they need 5% for their down payment plus closing costs plus the $12,000. In other words, we don’t allow them to buy the property without first having saved the fix-up money too.

But, equity in property does not count directly toward achieving financial independence. Sure, if they sold the property or did a cash out refinance it could help them, but just having more equity does not directly help with them qualifying as financially independent.

Buying at a slight discount does mean their cash flow is a little better. And, that does contribute toward them being financially independent.

Spending money on fixing up the property buys speed to improved cash flow from paying off the private mortgage insurance.

And, you might think that buying a property at a 10% discount might mean that they could buy properties faster because saving up for a 5% down payment is 10% less from the discount.

But, you got to remember that while they save 10% on a 5% down payment… which might mean saving about $1,875… they need to save up $12,000 more for the repairs before we buy the property with the modeling we do.

So, the reality is that first property they end up buying sooner if they’re not doing a fixer-upper.

We know that doing the regular Nomad™ strategy is faster than all the previous strategies they’ve considered up to this point, but does Norma’s predilection for fixing up properties help them be financially independent faster?

By buying fixer-upper properties, they’re able to be financially independent and stop working their jobs about 7 years faster.

Plus, because buying the fixer-upper properties gives them both extra cash flow and acquiring rentals faster, they could live at a higher standard of living sooner.

But, before all the properties are paid-off, would be able to sustain a higher standard of living buying fixer-upper properties.

So, instead of being able to live on $5,000 per month from their investments, they could be living on about $8,500 per month.

And because they bought their 10th property sooner… that’s one that they end up living in forever… by buying that sooner, they pay it off sooner which significantly boosts their standard of living. The full mortgage payment they were paying on that is now extra spendable cash each month if they desire to do that.

You might think that without the extra negative cash flow and being able to buy properties sooner with fixer-uppers means that they invest less overall to acquire the same number of rental properties. But, it turns out that’s not quite true.

Instead of investing about $365,000 to acquire the 9 rental properties… and we’re specifically ignoring the 10th property they bought and live in as an owner-occupant… instead of $365,000 they need to invest just over $402,000 because of all the extra money for repairs.

But some of this is subsidized for them by the extra cash flow. That’s partly why they can still buy properties faster even with the extra money required. The other part is improved debt-to-income.

That extra cash flow helps them with their debt-to-income ratios.

In fact, looking at their debt-to-income and their account balances, it looks like debt-to-income might be what slows down their acquisition speed more than having enough money for down payments.

They need enough income between their jobs and cash flow on their rental properties to be able to qualify for the next 5% down owner-occupant loan.

Debt To Net Worth

Furthermore, by buying properties faster as fixer-uppers, they end up with a lower overall risk later on then continuing to buy properties for a longer period of time when buying non-fixer-upper properties.

Now… the risk when measured as debt to account balances or debt to liquid net worth is very different than debt to net worth.

With improved cash flow buying fixer-uppers, they’re not limited by debt-to-income when buying more properties. That means their account balance is lower as they utilize it earlier for down payments to take on more debt. That means their risk as measured by debt to account balance is much higher for buying fixer-upper properties.

They have more debt… a lot more debt… compared to how much they have in their accounts.

They could help mitigate and reduce this risk by requiring more in reserves before buying their next properties, but they did not when we modeled it for this episode.

Speaking of reserves, buying properties earlier as fixer-uppers means they should set aside more in reserves earlier than they did with traditional Nomad™ from the last episode. 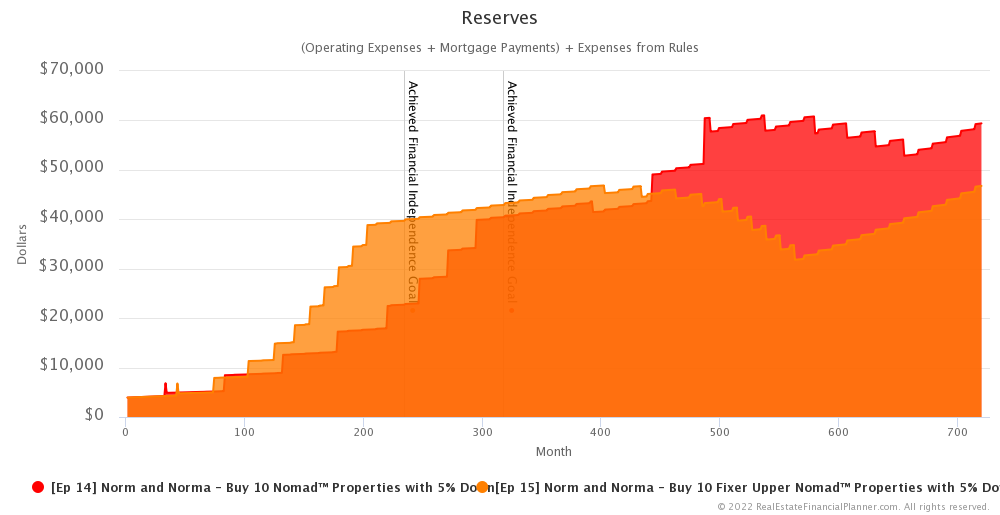 But we did not model it that way.

Instead, we can see there are times when buying fixer-uppers that they end up with a small number of times when they barely have 1 month of reserves for all rental properties and personal expenses and even one instance where they have less than one-month of reserves.

If really wanted to implement this strategy, we might have a conversation about slowing down a tiny bit and keeping more in reserves. Of course, this would change how fast they achieve financial independence. But, that’s the nice thing about being able to model this with the Real Estate Financial Planner™ software… we can see the impact of changing our assumptions and plan easily and compare one verson of a strategy to another.

In conclusion, buying fixer-uppers seems to significantly speed up how quickly they can achieve financial independence and their standard of living.

It does come with some increased risk, but in some other measures of risk, it is less risky.

While doing this modeling, Norm woke up one night in a cold sweat and an achy back after realizing in a nightmare that this means they’d need to move 10 times to implement this strategy.

Is moving 10 times worth being able to achieve financial independence and stop working years sooner? Maybe, but could there be a way to get the benefits of Nomading™ without having to actually Nomad™ and move themselves?

Well, there might be… come back for the next episode where consider the strategy of Nomad™ by Proxy where they have someone else move into the properties for a year instead of them.

I hope you have enjoyed this episode about doing fixer-upper Nomads™. This has been James Orr with the Real Estate Financial Planner™ Podcast. Bye bye for now.