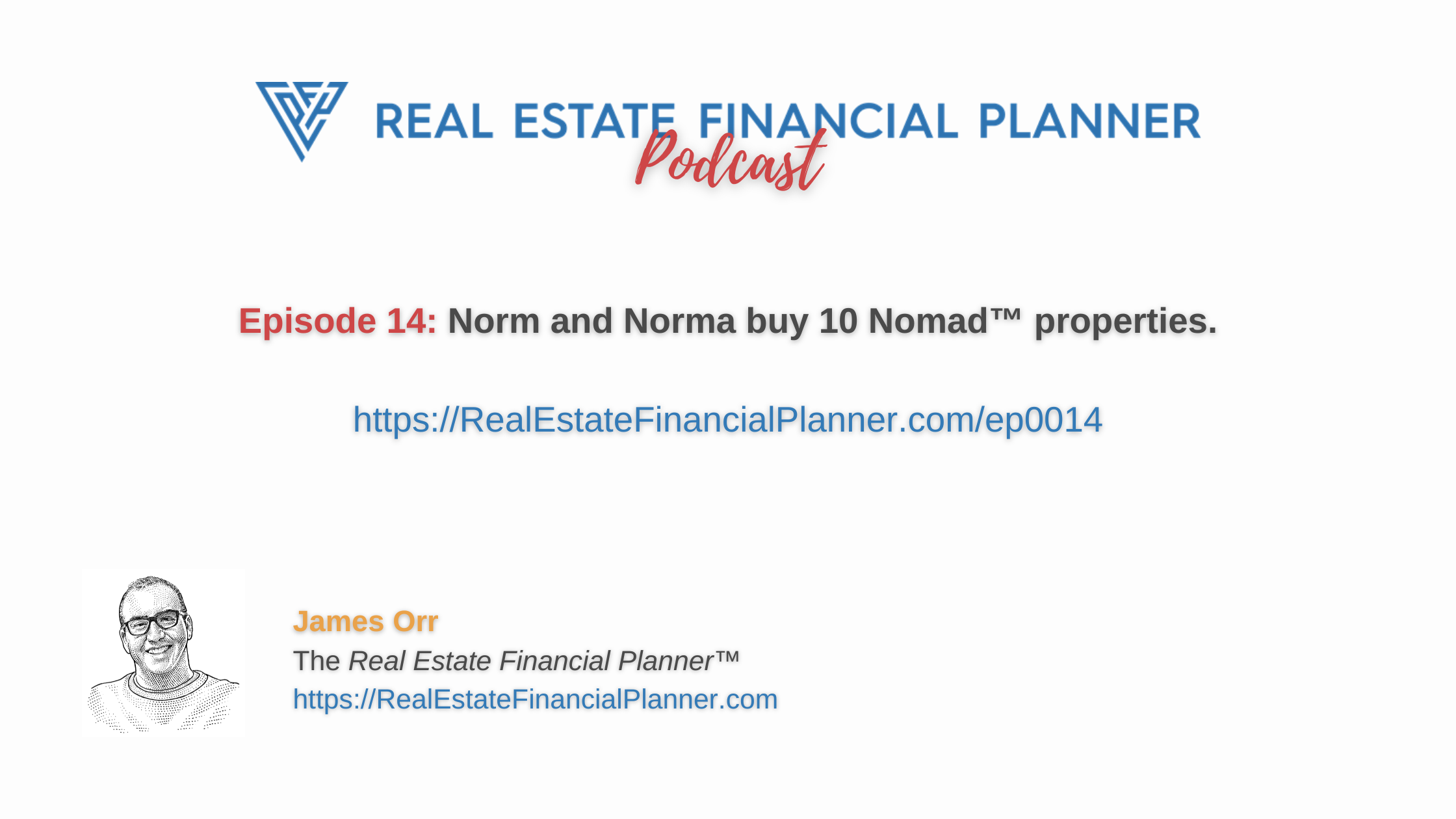 Welcome to the Real Estate Financial Planner™ Podcast. I am your host, James Orr. This is Episode 14.

In the last 8 episodes, considered the following:

Except for the first couple episodes where they invested in stocks, I’d consider the other 6 episodes to all be examples of utilizing the traditional buy and hold real estate investing strategy.

Now, we’re going to switch strategies again and are going to consider what we call the Nomad™ real estate investing strategy.

So, what is the Nomad™ real estate investing strategy and why would they even want to consider it as a possible means to achieving the end of financial independence?

The Nomad™ strategy in its most basic form is:

And, that’s it. Those 5 simple steps are the basics of the Nomad™ real estate investing strategy.

For , they plan to acquire 10 properties total using the Nomad™ strategy… including the 10th property that they will continue to live in.

So, they’ll end up with 9 rental properties and an owner-occupant property.

Each property they’ve lived in for at least a year.

Each property they purchased with a 5% down owner-occupant loan with private mortgage insurance.

In previous episodes, just like in this episode, it took time to save up enough for down payments, closing costs and reserves to buy their first property. They’re only starting with $10,000 in savings and they’re saving about $1,000 per month.

Plus, they’re not immediately renting any owner-occupant properties they buy right away… for the Nomad™ property, they don’t rent the first property until they’ve bought the second property.

But, if they could buy a 5% down payment property as an owner-occupant and rent it out right away, how would that compare to them buying a non-owner-occupant rental property?

Let’s take a look and see.

First, let’s look at how much each of the properties appreciates in the first year by looking at the Return in Dollars Quadrants™.

Since the properties are all the same, all 4 of them… regardless of down payment go up in value the same dollar amount: $11,250.

If you looked at Return on Investment Quadrants™, they’d have different numbers since each one had a different down payment amount and slightly different closing costs, but as far as the number of dollars that each one went up in value… it is the same regardless of down payment.

How about we discuss cash flow next?

If only put 5% down on an owner-occupant purchase… and if they were allowed to have a renter from the start… which they’re not allowed to do when they get an owner-occupant loan… but if they could… they’d get about -$2,773 per year in cash flow. This is after all expenses including the mortgage payment, private mortgage insurance, taxes, insurance, maintenance, and vacancy. If they were paying a professional property manager, we’d include that too.

So, by buying the property with a very small down, they have almost $2,800 in negative cash flow for the year.

So, even though the put down 10% of the purchase price less… the difference between 5% down and 15% down, they actually have almost $600 per year better cash flow.

That’s pretty interesting to … they can put less down and have less negative cash flow.

But, in order to have essentially break-even cash flow, they had to come up with 15% more of the purchase price as a down payment… the difference between 5% down and 20% down.

It turns out it is just over 20 years.

I’ll pause to let that sink in… they could afford to pay that $2,773 per year in negative cash flow for over 20 years before they got to the same point where they spent $56,250.

Now, some of you would argue: “But James, they’re different: in one case you still have that money in equity and the other one you paid in negative cash flow.”

And I might ask a couple questions in response:

First, what do you gain by being able to purchase the property earlier?

The answer to that first question is: you get any returns from appreciation, from paying down the debt on the property and the tax benefits of owning the rental in the form of depreciation… all those minus the negative cash flow.

So, for the 5% down payment property… that’s about $15,000 net in the first year… even after you take into account the negative cash flow. So, while they’ve got some negative cash flow, they’re probably up net $15,000 in year 1 and every year that continues.

And, the second question I might also ask is: is the negative cash flow of $2,773 going to remain that forever?

And, the answer to the second question is: probably not.

As rents inch up a little bit each year, that negative cash flow goes down.

For example, if rents just kept pace with a long-term estimate for inflation of 3% per year, by the second year the property that was renting for $2,600 would be renting for 3% more or about $78 more per month.

So, instead of having to come up with $56,250… instead get to “finance” that part of the down payment that they didn’t need to come up because they only put 5% down and instead paid a much smaller amount of negative cash flow each year for several years.

Now, they do need to be able to cover the negative cash flow, but fortunately, it is not even as bad as the $2,773 per year that I made it out to be. Why?

It is not as bad as the negative $2,773 because of the tax benefits they get by owning a rental property.

What does that mean?

OK, you got that, but what does that mean?

It means they can reduce the income they need to pay taxes on by that amount.

For example, instead of paying taxes on the $72,000 that they earn from their jobs that year, they pay taxes on $72,000 minus the $11,590 in depreciation on the one rental property. Of course this would apply to additional rental properties as well.

But, what does that mean in terms of actual dollars they save in taxes? It is $11,590 times whatever the tax bracket that would have been in… typically their highest bracket. I’ll be a little more conservative and estimate it using their effective tax rate instead of the highest… so if they were paying taxes at an effective tax rate of 17.85% that means by owning this rental property they get to keep an extra $2,069 in what we call Cash Flow from Depreciation™.

We call it Cash Flow from Depreciation™ because it is cash flow they get to take in the form of not paying taxes on their income from their paycheck each pay period that they get from depreciation on the rental properties. Or, if they choose not take it as a reduction in taxes paid from their paychecks from their jobs, they would get it back as a refund at the end of the year when they file their tax return.

So, we’ve talked about appreciation… or the tendency for property values to increase over time.

We’ve talked about cash flow or negative cash flow… which we also call deferred down payment… depending on the down payment amount.

We’ve talked about the tax benefits of Cash Flow from Depreciation™.

But, there’s one more area of return: debt paydown.

The more they borrow the more that gets paid down each month.

And, the lower the interest rate the more that gets paid down each month.

So, really the 5% down loan really gets the largest debt paydown benefit of all 4 loan types.

If we add up the appreciation, cash flow, tax benefits and debt paydown and compare the sum of all of those for each of the different purchase options, we can see that the worst dollar amount of return is from the 15% down payment loan with about $13,000 net profit total in the first year.

But, you know seeing that the return by purchasing a Nomad™ property is not that much worse than putting an extra $56,250 down won’t really mean that much if it doesn’t allow to achieve financial independence in a competitive time frame.

Well, the good news is that Nomad™ strategy is faster to their goal of financial independence. It is a little over 6 years faster in fact… it only takes them 26.50 years compared to almost 33 years if they just buy an owner-occupant property and then 10 rentals properties with 15%, 20% or 25% down as we discussed in Episode 11.

In conclusion, doing the Nomad™ strategy seems like it could be a good option for them if they’re willing to move 10 times… each time they buy a new property to live in as an owner-occupant.

It seems to be significantly faster than buying an owner-occupant property then buying 10 rentals with 15%, 20% or 25% down.

Is being able to retire 6 years faster worth moving 10 times? Only they can answer that question.

You can look at the additional charts linked below to see how the risk profiles compare but Nomad™ turns out to be remarkably resilient to drops in rent because each property is held for at least a year before it is converted to a rental property.

And, even though buying Nomad™ properties is riskier earlier on with the 5% down payment and higher loan-to-value loans, when we look at a couple of measures of risk dealing with debt, you will find that the risk is ultimately reduced faster and lower over time making it lower risk later on than the other strategies.

Norma is especially handy and feels like she could take a property that needs a little work and while they were living in it, fix it up and capture some sweat equity. What is the impact of buying a little fixer upper property that move into as Nomads™ each year have on their ability to be financially independent quickly and safely? Is it better? Or, worse? And by how much? Find out in the next episode.

I hope you have enjoyed this episode about considering Nomading™. This has been James Orr with the Real Estate Financial Planner™ Podcast. Bye bye for now.

Compare “owning and buying rentals versus Nomading™” in pairs by down payment:

Or, compare all of them together. Please be aware that with 4 variations on the same chart, they can be a bit cluttered and harder to interpret.