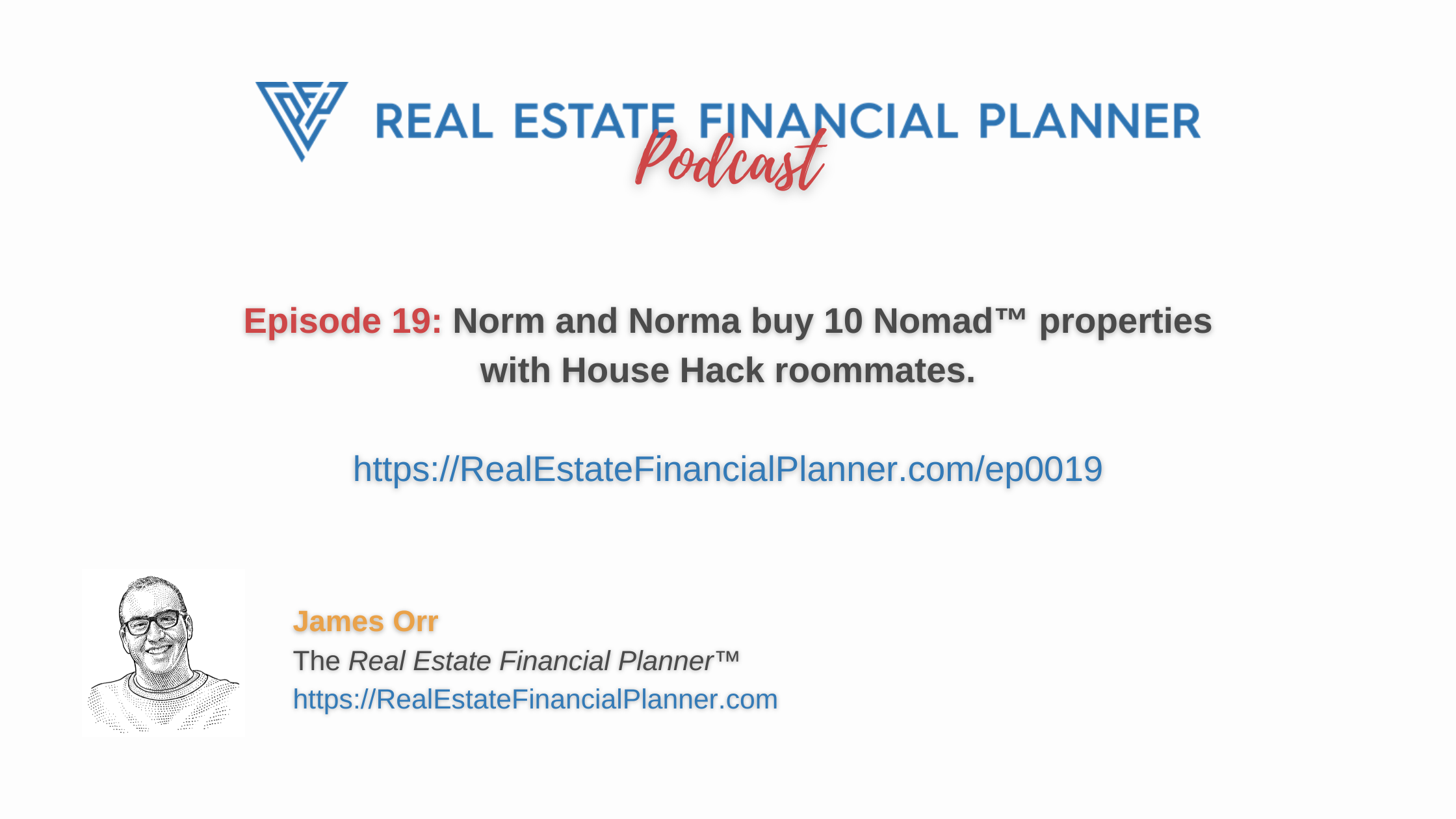 Welcome to the Real Estate Financial Planner™ Podcast. I am your host, James Orr. This is Episode 19.

In the last episode, we went on a tangent and discussed the impact of requiring more reserves before buying additional properties for when Nomading™.

In this episode, we’re going to talk about house hacking.

“…when you purchase a property with four units or less, live in a portion of it, and rent out the remaining area, with the goal of reducing your personal living expenses, or potentially even profiting.”

So, … just out of college… say… we’ve been used to having roommates for the last four years, why not continue to have roommates?

They could have decided to buy a duplex, triplex or fourplex and rented out the other units while they lived in one of the units.

In fact, these are exactly the same properties.

The only difference when we model house hacking is that we model them getting some extra income when they’re living in the property.

Depending on how many roommates they get, they receive $650 per month per roommate.

So, house hacking really just appears as if they’re getting side hustle that brings in either $650 per month, $1,300 per month or $1,950 per month. The amount depends on whether they have 1, 2 or 3 roommates.

If they got a side hustle and made that same amount of money they would end up in the same place financially.

In all the cases with roommates, once they move out of their property, they bring the roommates with them to the next property and convert the previous property to a rental like they did in Episode 14 where they did Traditional Nomad™.

The advantages of house hacking… or getting a side hustle for that matter… are:

When have 3 roommates, they’re able to buy properties the fastest.

Having 1 roommate where they make an extra $650 per month is faster than doing traditional Nomad™.

That’s a pretty significant increase in their income and especially their savings rates.

Being able to buy properties sooner, means they can get to the point where the income from the rentals is enough to replace the $5,000 per month they need to support themselves and be financially independent.

So, when do they achieve financial independence?

When they do traditional Nomading without house hacking roommates, it takes them just under 26.5 years.

If they get just one roommate for $650 per month, it speeds up their ability to be financially independent by about 4 years. Instead of it taking 26.5 years, it takes 22.5 years.

What if they get two roommates for $650 per month each?

Well, that speeds up them being financially independent by almost another 3 years.

And if they get a third roommate for yet another $650 per month, that means they can be financially independent 2 years faster than having 2 roommates.

So, if they do traditional Nomad™ without roommates it would take about 26.5 years but if they get 3 roommates it only takes a little over 17.5 years. So, by getting 3 roommates they’re able to speed up their ability to retire by a little under 9 years.

But certainly, the speed to being financially independent isn’t everything.

What about net worth?

Well, having more roommates means a higher net worth too.

In fact, by the end of our modeling in year 60, house hacking with 3 roommates until they’re financially independent then not having roommates from then on… results in having a net worth of over $109 million. Compare that to only $67.8 million with traditional Nomad™.

But those numbers are in future inflated dollars. What if we adjust back to today’s dollars?

Well, traditional Nomad™ is like them having $11.5 million in today’s dollars but 60 years from now.

If they Nomad™ but get 1 roommate for the property they’re living in, they end up with about $3.7 million dollars more… about $15.2 million dollars versus $11.5 million.

If they get 2 roommates, they end up with $2.2 million more than they had with just 1 roommate.

And 3 roommates is another $1.1 million more than 2 roommates.

The difference between not having any roommates and just doing traditional Nomading™ versus getting 3 roommates is about $7 million dollars or about 60% higher net worth.

But not everything is better when they house hack.

Let’s consider how much negative cash flow they have.

When they are doing traditional Nomad™ and it takes them longer to save up for down payments, the property they’re living in has time for rents to increase while they own them. This means that cash flow is better when they finally convert it from living in the property to a rental.

That means they’re much less likely to have negative cash flow and if they do, it typically is a smaller amount.

But, when they have the ability to buy properties quicker when the extra money from their house hacking roommates, they may only need to stay in the property for the 1 year minimum required by the lender for it being an owner-occupant loan.

That means they’re much more likely to have negative cash flow when they buy properties faster.

If we add up the total amount of negative cash flow… for every property and for the entire period we modeled, with traditional Nomad™ would have a total of just over $10,000 in negative flow.

However, buying properties faster with 1 house hack roommates, it is over $20,000. Again, that’s the cumulative total for all 10 properties over the entire 60-year period.

Now, to be clear… this isn’t to say that their whole portfolio was negative… this is looking to see if any property was negative by itself and counting that if it was.

Furthermore, if we take into account the benefits they get from depreciation on rental properties in the form of Cash Flow from Depreciation™ it all but completely offsets any negative cash flow they would have.

That’s $40 total for all properties across all 60 years. That’s so small, it could be offset by even a slight change between reality and what we modeled.

And, we already know that by buying the properties sooner they have more money in their accounts to offset these possibly negative cash flows by having house hacking roommates.

Of course, as we discussed in the last episode on our tangent about the impact of reserves, we’re still using a pretty aggressively small amount of reserves to be able to buy the next property. If they really wanted to do this strategy we might recommend they use a more conservative amount for reserves.

Total Debt To Net Worth

One way we like to measure risk is to look at the total amount of debt they have with a strategy compared to their net worth.

I just started to summarize this measurement by looking at the average measure of total debt to net worth over the entire 60-year period.

The average when they do traditional Nomad™ is 104%.

It is the same 104% risk level if they have one house hack roommate.

But the average risk for the entire scenario is slightly lower at 101% with 2 roommates and even a little bit lower at 97% with 3 roommates.

If we take the average of total debt to account balance for the entire 60-year period, it gives us a feel for what the average measure of this risk is. And then we can use that average to quickly compare one scenario to another.

With traditional Nomading™, it has an average total debt to account balance of 381%.

If they get 1 roommate, that actually increases and becomes more risky at 424% on average.

However, it drops back down to be closer to traditional Nomading… but still slightly more risky… with 2 roommates at 391% on average.

Finally, by getting 3 roommates, it is actually less risky… on average… for this specific measure of risk… total debt to account balance… with an average of 362%.

In conclusion, house hacking is financially like getting a side hustle.

The more roommates the more they make from the house hacking side hustle.

With more money, they can buy houses faster which leads to a higher net worth and faster journey to financial independence.

But it seems it is slightly less risky overall when measuring risk as total debt to net worth with more roommates.

But, when we measure risk in terms of total debt to liquid net worth aka total debt to account balances… it is riskiest to get 1 roommate and the lowest risk to get 3 roommates. With 2 roommates and traditional Nomading™ very similar and in the middle.

If are OK with getting roommates, house hacking could be both a financially beneficial and reasonably similar risk to traditional Nomad™.

Buying 10 properties as a Nomad™ over a relatively short period of time will certainly make them one of the better clients for their real estate agent.

They wonder if maybe they should consider getting their real estate licenses. By getting their real estate license, maybe they could choose to get a discount equal to the commission they would have earned by representing themselves when buying or get no discount but get a rebate on their down payment in the form of a commission by representing themselves.

When real estate agents utilize the Nomad™ real estate strategy, I call this the Ultimate Real Estate Agent Retirement Plan™ and that’s what we’ll discuss for in the next episode.

I hope you have enjoyed this episode about house hacking with some roommates. This has been James Orr with the Real Estate Financial Planner™ Podcast. Bye bye for now.

Compare traditional Nomading™ to getting 1, 2 or 3 roommates:

Compare Nomading™ to Nomading™ with 1, 2, and 3 House Hacking Roommates. This can be a little cluttered showing all 4 on the same charts.