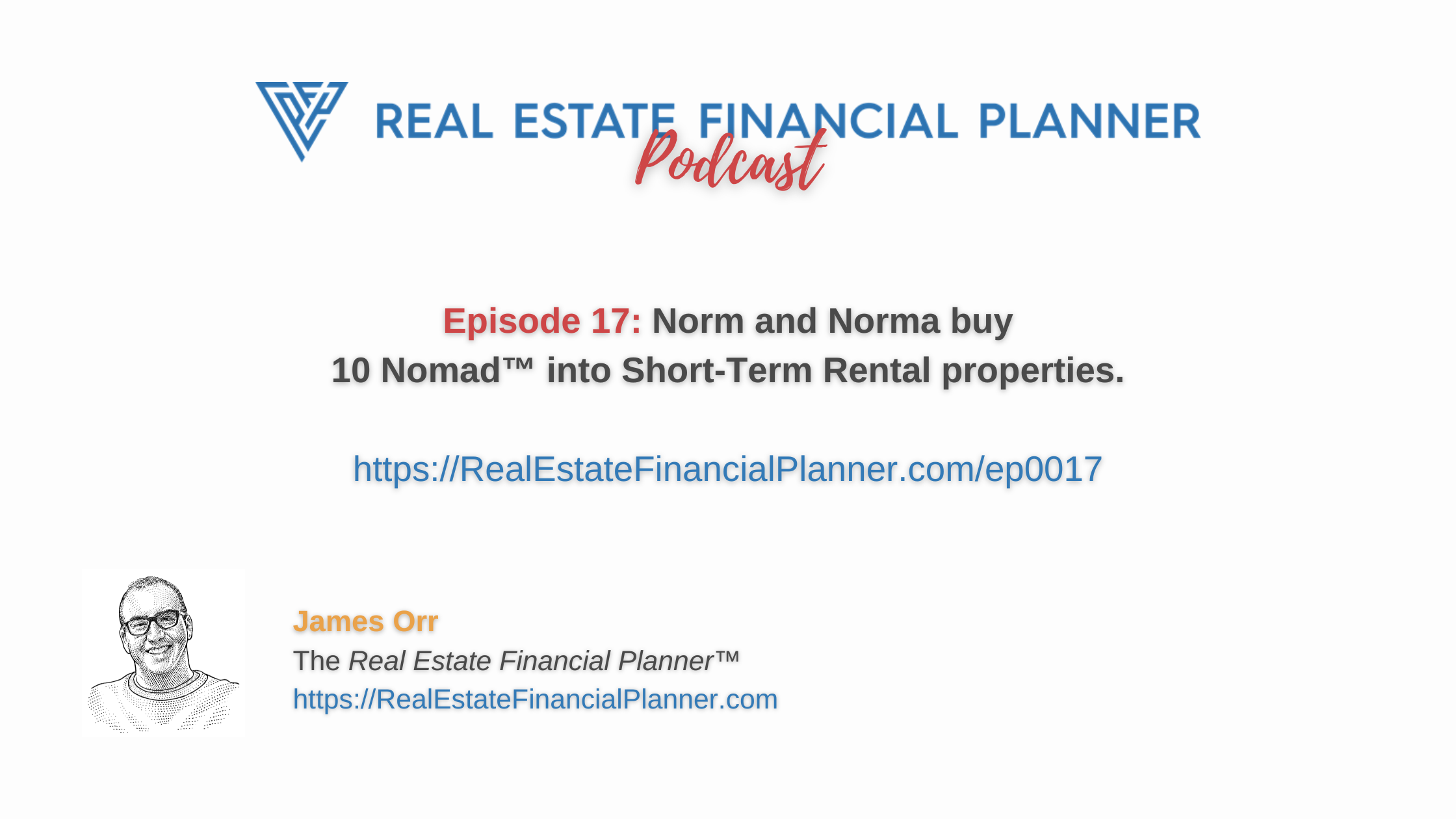 Welcome to the Real Estate Financial Planner™ Podcast. I am your host, James Orr. This is Episode 17.

They figured that the extra income they could earn by doing the relatively small amount of extra work required to run a short-term rental business might be worthwhile and help them achieve financial independence faster and safer than the other strategies they were considering.

And, they were right.

Saving up 15%, 20% or 25% down payments to buy short-term rentals were some of the fastest strategies to achieve financial independence… second only to buying fixer-upper properties.

In recent episodes they were considered utilizing the Nomad™ real estate investing strategy of buying homes as an owner-occupant with 5% down and then… after living in the property for at least a year to fulfil the obligations to the lender to get the owner-occupant financing… the convert the property to a rental and buy another 5% down payment owner-occupant property to move in. They would then repeat this process until they had acquired as many rentals as they wanted.

So, it seems only natural that they consider combining the Nomad™ real estate investing strategy with short-term rentals.

But once they’ve saved up another 5% down payment and can qualify to buy a second owner-occupant property to move in, they convert the previous one to a rental… this time a short-term rental with improved cash flow.

The only real “fly in the ointment” of this strategy is qualifying for the next property. Unlike converting properties to long-term rentals with year-long leases where most lenders will allow them to use that income to offset the mortgage and other expenses on the property they’re converting to a rental, with short-term rentals many lenders will want to see a year of history of income from the short-term rental to be able to use that income to help qualify for the new mortgage.

For the sake a simplicity in this episode and modeling, we have assumed they were able to find a lender that would allow them to use the income from their short-term rental to be able to qualify for their next Nomad™ purchase.

So, how does Nomading™ into short-term rentals compare to them just doing plain-vanilla… but still amazing… Nomad™?

Doing plain-vanilla Nomad™ took 26.42 years from when they start until they’re able to support themselves from their investments without working their jobs anymore.

But, if they do Nomad™ but convert the property they were living in into a short-term rental instead of a long-term rental, it would take them only 16.58 years. That’s almost 10 years faster.

And that was a really impressive time to achieve financial independence.

Heck, it is still about 2 years faster than doing traditional plain-vanilla Nomad™… which is amazingly fast.

However, combining Nomad™ with short-term rentals improves the speed to financial independence by about 8 years at the cost of having to move into 10 properties.

Back to our story about … part of what allows them to be financially independent sooner is that they’re able to acquire properties faster.

The extra income from the short-term rentals helps them in two important ways.

First, it allows them to save up for down payments faster. So, if the limiting factor in them buying properties was down payments this helps.

Second, it allows them to have higher income when calculating debt-to-income. So, if the limiting factor in them being able to buy properties was their debt-to-income to qualify for loans, this also helps there as well.

That means they’re able to acquire their 10 properties considerably faster.

Once they own the properties, they’ve locked in their mortgage payment… the principal and interest expenses on the property… and they then get the benefit of increasing rents over time with a large portion of their expenses fixed.

In fact, by the time they’re financially independent doing the Nomad™ to short-term rental properties strategy in month 199, the difference in cash flow is significant.

They are generating over $7,700 in monthly net cash flow after all expenses on all their rental properties. Compare that to less than $2,000 with traditional plain-vanilla Nomad™. I can’t help but defend traditional Nomad™ though… it is still an amazing strategy… especially compared to many of the other strategies that have considered so far. It is just that Nomading™ into short-term rentals is better.

Cash flow is important, but it is not everything. What about net worth?

Is it better for and their net worth to utilize short-term rentals?

By the end of our modeling in year 60, they’d have just under $67 million doing plain-vanilla Nomad™ but if they add in short-term rentals, they end up with over $116 million.

That’s in future, inflated dollars. If we adjust back to today’s dollars, traditional Nomad™ is about $11.5 million in net worth compared to about $19.8 million if they add short-term rentals. That’s about $8.3 million dollars more by doing the extra work of short-term rentals.

Those net worth numbers assume they maintain their same frugal standard of living for the entire 60-year period.

I think most people would… at some point… let their lifestyle creep up a little bit.

What if we just looked at what standard of living they could support from their investments?

Let’s look at when they finally achieve financial independence with the traditional Nomad™ strategy in month 317.

In month 317, they’re finally about to generate about $5,000 per month in today’s dollars with traditional Nomad™… enough to replace what they were earning and living on from their job.

But at that same month if they opted to convert their Nomad™ properties to short-term rentals instead of long-term rentals, they’d be living at more than two times their standard of living. Instead of earning about 100% of what they were earning, they’re earning over 220% of what they were earning from their investments… that’s about $12,000 per month instead of $5,000 per month in today’s dollars.

But, what about risk. Is it riskier to do short-term rentals than to do long-term rentals?

Normally when we consider risk, there are a few go to metrics we like to look at:

Let’s run through each of these quickly.

Let’s start with debt-to-income. We talked about this briefly earlier.

So, from a debt-to-income perspective, utilizing short-term rentals seems to have a lower risk profile compared to traditional Nomading™.

How about Rent Resiliency™?

By having higher income on the properties, it means that rents can drop more before they’d have negative cash flow.

So, from a Rent Resiliency™ perspective it looks like doing short-term rentals gives them a lower risk profile as well.

Debt To Net Worth

That’s two for two so far, but how about debt to net worth?

That means that they have a much higher debt load when using short-term rentals.

Higher debt with a limited increase in net worth means their risk… as measured by Total Debt to Net Worth is higher when doing short-term rentals.

So, for the first 20 years, from a total debt to net worth perspective, it is riskier for them to utilize short-term rentals, but for the remaining 40-years after year 20, it is riskier to do traditional Nomad™ with long-term rentals.

But what about measuring their debt compared to their liquid net worth or what we call total debt to account balance?

This is true for the first 20 years until it switches for similar reasons that we just discussed with total debt to net worth.

And… eventually… the extra cash flow from short-term rentals means they have more months of reserves set aside.

However, in the short-term, being able to have the income and debt-to-income to buy properties faster and not mandating that they keep a minimum number of months of reserves before being able to buy the next property means that are operating dangerously low on reserves.

If really wanted to utilize the short-term rental strategy, we might want to rerun their plan with requiring they keep… let’s say… at least 6 months of reserves for their personal expenses and each of their rentals before being able to buy the next property.

This would slow down their acquisition speed, but could reduce their risk considerably.

Of course, we could use a similar rule for traditional Nomad™ too… requiring… let’s say… 6 months of reserves for that too.

If we have the same rule that requires 6 months of reserves in either case, couldn’t we say that these could have similar risk profiles during the acquisition phase?

In each scenario they would have a full 6 months of reserves for their personal expenses, all their rentals including the one they were about to buy.

In conclusion, utilizing short-term rentals combined with the Nomad™ strategy can significantly improve their speed of achieving financial independence over Nomading™ into long-term rentals.

It can also give them a higher standard of living and/or a higher overall net worth.

From a risk perspective, they benefit from improved cash flow, but suffer from an increase in their debt load early on.

But, caught a podcast I did that talked about house hacking and they begin to wonder what the impact of getting a roommate or two or three might be on their ability to achieve financial independence. Find out how that works for them in the next episode.

I hope you have enjoyed this episode about Nomading into short-term rentals. This has been James Orr with the Real Estate Financial Planner™ Podcast. Bye bye for now.

Look at the previous Scenarios from Episode 12 with 15%, 20%, 25% down payment as non-owner-occupant (investor) financing.